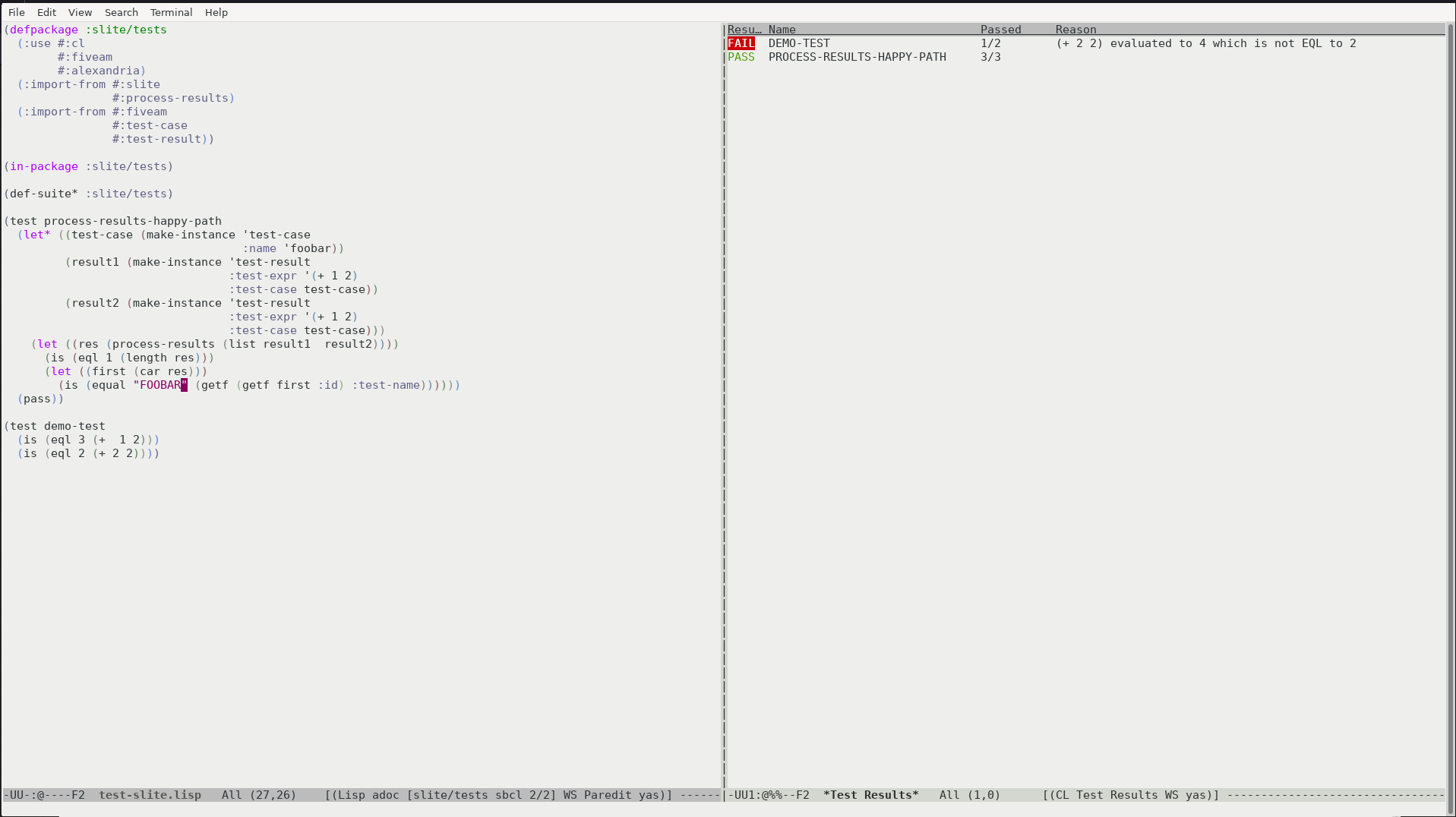 Slite stands for SLIme TEst runner. Slite interactively runs your Common Lisp tests (currently only FiveAM and Parachute are supported). It allows you to see the summary of test failures, jump to test definitions, rerun tests with debugger all from inside Emacs.

We support both SLIME and SLY.

At the moment, treat this software as Alpha quality. Things will break, APIs will change, but your feedback will be very valuable.

I'll expand on this later. Basically you need to (asdf:load-system :slite), and also need to load slite.el into emacs. That should be all you need to do.

Run all you FiveAM tests

This is the function you'll call most often. In a Common Lisp buffer, press C-c v or M-x slite-run. You can then provide the expression as (slite:run-all-fiveam-tests). You could run a specific test suite with (fiveam:run test-suite-name).

You'll get a table of all the tests and their results. The failed tests will be on the top.

Press RET on a test to see details about the failure. On the table, or in the details buffer, press r to re-run the test with debugger (i.e. when the test fails the debugger will open up). Delete a test with M-x slite-delete-test.

Press Delete to delete a test (useful when you rename a test and want to delete the old test).

Press M-. on the test name in the details view to jump to the test. (This only works on Lispworks, and only if you use a patched version of FiveAM)

Press C-c j to compile the current expression, and then rerun the tests. (Essentially equivalent to C-c C-c followed by C-c v)

Honestly, that's about all you need to know. Although, there's one more neat little feature:

When I do TDD, I usually run my tests and immediately if the test passes I run git commit -a -m .... So my Emacs compile command might look like make tests && git commit ... .

There are two ways to do this with slite: you could do this as part of the lisp expression that you pass to slite-run, or you could use the slite-success-shell-hook from the Emacs side. The latter option will work even when you're using a remote slime session.

For example, (setq slite-success-shell-hook "cd ~/code && git commit -a -m ...") will do essentially what I was suggesting earlier. This API is a little awkward, so we might change this in the future

Ensure you (asdf:load-system :slite/parachute). At this point, you use M-x slite-run to run tests like (parachute:test 'foo-bar). All the same functionality such as debugging, deleting should work. Jumping to test is currently not surpported.